Biomarket is dedicated to the following principle: eco is accessible, ordinary and natural. We believe that with ecological products becoming more easily available, people’s food and living environment will become healthier and more joyful. Biomarket stores have the biggest and most exciting assortment of eco, local Estonian food, health and wellness products in Estonia. We offer products made of chemical-free raw material without artificial fragrances, colorants, preservatives and flavours, caring for the people and the saving the environment. When buying at the Biomarket, you can be certain that the products are healthy, safe and clean. Here you would find all you need for both daily purchases and for a gift. Do something good for your own health and for those you love – use eco products! 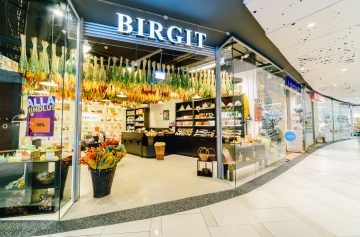 BIRGIT store offers products from leading cosmetics manufacturers in Western Europe and from fledgling Eastern European (Latvian, Estonian etc.) companies.
We offer:
• natural bath and sauna products with essential oils and plant extracts
• hand-made soaps, bath salt balls (Cleopatra baths) etc.
• body, hair and facial care products
• perfumes
In our store, you can find over 1200 cosmetic products for the beauty of your face, body and hair.
On Saturdays, a professional perfumer works in the store, who creates not only trendy perfumes, but also your personal aroma that nobody else has!
Be part of the mysterious and miraculous, joyful and harmonic process of beauty that certainly finds a response in your soul. Create your own fragrance!

Bottega Verde is an Italian family-owned company that has been producing natural cosmetics for over 40 years. Palazzo Massaini in Toscana is Bottega Verde’s birthplace and home, with red grapes and olives, lavender and oats grown in sunny fields for the most popular product lines throughout the years. All plant extracts are separated on site during a natural process to maintain their active properties.
Bottega Verde offers a range of products for face, body, hair and foot care, bath experience, makeup and nail care, for men and babies, abundant gift sets for Christmas. Products reach our store directly from the manufacturer, at prices that anyone can afford. 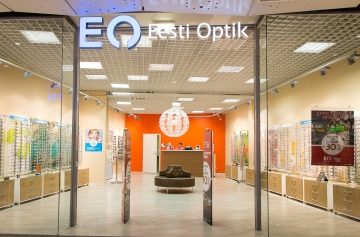 Eesti Optik is the oldest domestic optician company, which owns 19 stores all over Estonia. We offer a wide selection of glass frames, glasses, sunglasses, contact lenses and other optics products from the world’s best manufacturers in this field. Our stores have state-of-the-art technology to check your eyesight and prescribe glasses. Together with our opticians and customer service representatives, you will find the best glass frames for you. Our employees have undergone special training and have the necessary expertise to consider the specifics of glasses and the fashion preferences and lifestyle of each customer.

Thanks to long-term co-operation with Europe’s largest glass manufacturers, we are able to offer products of world-renowned brands. We import many brands, including the following brands of the French company Look Vision – Le Ducat, New Man, Xenith, Le Tanneur, Crobs. We offer optics products from major companies, which include well-known brands such as Karl Lagerfeld, Vogue, Ray-Ban, Hugo Boss, Max Mara, Pierre Cardin, Lacoste, Calvin Klein and others. In addition to this, we are the official representative of the Mexx brand in Estonia. Our product range includes high-tech glasses that provide the best viewing experience.

I.L.U. knows your most secret desires and has created its selection according to your needs.
It is easy to find your favourite brands here and discover new pleasant surprises from well-known and beloved brands across the world.
We offer products for everyday use as well as elitist luxury for women and men. The I.L.U. experience is made perfect by professional and pleasantly discrete beauty consultants who will help in finding the perfect products for you.

The store also features the BeautyBay Hair Studio where professional hairdressers and hair stylists offer their services every day. 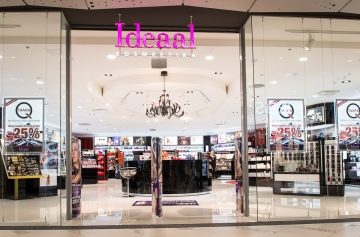 Ideaal Kosmeetika is the largest cosmetics and perfume retail chain in Estonia. Our spacious and bright store has a wide range of beauty products, from among which the experienced staff will help find the right product for you. 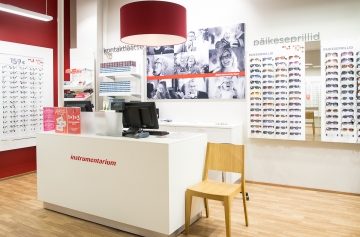 Our INSTRUMENTARIUM eyewear store offers you suitable glasses, contact lenses and sunglasses. Your eyesight will be checked and your glasses will be prescribed by an optician and an ophthalmologist. You will be welcomed by friendly staff and quality products. Loyalty card owners get a 10% discount on all optical products at full price and the eye examination. 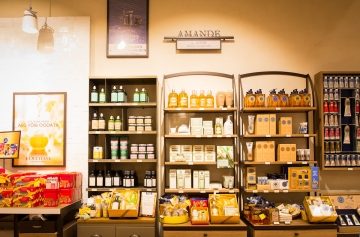 L’Occitane en Provence is a French cosmetics brand that in addition to body and hair care products, also offers perfumes, candles and room scents. The brand was created in 1976. In their products, L’Occitane uses the most valuable natural assets: essential oils and natural ingredients. 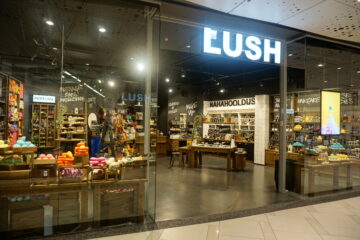 Since the creation of Lush 21 years ago, the LUSH Cosmetics brand has considered the most important innovation and work ethics. LUSH creates, produces and sells fresh handmade breakthrough beauty products, such as fizzy bath bombs, shower jellies, dry shampoos and toothpaste tabs. LUSH places emphasis on fresh ingredients such as organic fruits and vegetables. Being strongly against animal testing, the Lush Prize with an annual prize fund of £250 million, which recognises politicians, lobbyists, researchers, scientists aiming to end animal testing, was launched (in collaboration with the Ethical Consumer Organisation) in 2012.

The LUSH company has an extensive department of ethical consumption, which supports the initiatives of fair trade and community consumption. LUSH is also one of the leaders of the cosmetics industry in the fight against over-packaging, by organising awareness campaigns, and designing products that can be sold to customers “naked” or without packaging. LUSH was awarded the RSPCA Good Business Award in 2006 and 2007, the PETA Trailblazer Award for Animal Welfare in 2006 and “the Business of the Year” International Fund for Animal Welfare Award in 2010.

Mark and Mo Constantin, co-founders of the company, were awarded the British Empire Order of Merit in the cosmetics industry in 2010.

LUSH currently has 930 stores around the world, operating in 49 countries.

Norman-Optika is a family business that was founded in 1992. Today, we have 9 stores all over Estonia, located in Tallinn, Pärnu, Kuressaare, Tartu, and Haapsalu.
There is a vision check office in all of our stores, with an optometrist working in most of the offices. Six stores are equipped with the equipment for grinding lenses, which allows us to provide quick and professional service.

In Norman-Optika we have
• Professional customer service and diverse selection of eyewear
Our team is daily giving utmost to offer our clients a diverse selection of eyeglasses and spectacle lenses with expert advice and counsel. Our sales consultants and optometrists will be glad to introduce and analyze different options with you, so that you could make the best decisions for your eyes and visual needs;
• Exclusive brands
Only Norman-Optika sells well-known trademarks such as Gigi Barcelona, Kenzo, Cerruti 1881, Rochas, Vespa, Made in Italia, Sonia Rykiel, Woodys Barcelona, New Balance and Eden Park;
• Innovation
Every year we visit the largest exhibitions in the world of optics, to keep us informed and up to date about fashion trends and technical possibilities. We implement our experience and knowledge in developing Norman-Optika stores. We are able to offer very high quality vision examinations and the service of glazing spectacle lenses.
We are here to help you make the best selections for your vision. You are always welcome!

By continuing to browse this site, you agree to the terms and conditions for our use of cookies to improve the user’s experience. Read more.